The Origin of the night. (folktale of Paraguay)

Posted by Montse Under Blog | 3 Comments

The pot Baio, The Origin of the Night (folk tale of Paraguay)

In the beginning, there was no sleep for the night and the sun never ceases to shine. 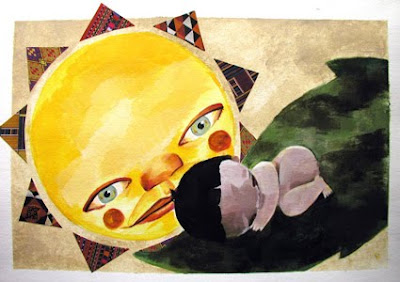 In the middle of the jungle, in a clear always illuminated by the sun, had a huge pot. The genius of the forest there called Baio was closed in the dark, and next to it were also prisoners all birds and nocturnal animals. One day a father and son went out hunting for those sites. Chasing a deer reached the center of the forest, and saw the pot Baio.

We’re leaving here! said the father.
This pot must belong to Baio, the genius of the forest, and if s’empiparà surprising.
No, wait a little, replied the young.
Do not be so cowardly. I had never seen so large a pot, which will be inside?
And saying this, the couple began hitting her with his bow, to see if it was full or empty. But the pot was found to be very fragile, and when he was given two or three times with his bow broke, opening a large crack in it. To crack that escaped the night and all its creatures. Also the moon came out from inside the pot and hid in the darkness. 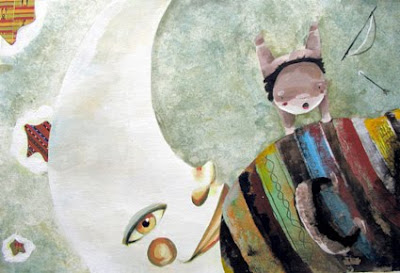 Baio himself, very angry, he hid in the night so deep. Everything was dark.
He had not the slightest ray of light. As human beings did not know the terrors of the night because they had always light, began to ask for:-What happened? Where has the sun? They spent days and days, and the sky was still dark. 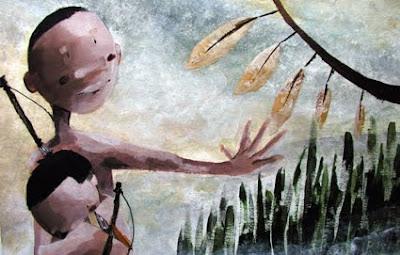 Nobody dared to go into the jungle, because now living owls, owls, wild beasts lurking in the dark, all living men had never seen.
They made all kinds of offerings to the sun to shine again, but it was useless.
Finally, the boy himself had broken the pot came up with the idea of burning beeswax.
The smoke of the wax rose in the sky, and slowly poured the darkness that threatened death to all peoples and nations. From then on the day and night they alternate, and humans were able to live more or less at first, of course, things were not like before. But at least now had several hours of light, during which it was possible to live, hunt and procure food daily.

3 Comentaris a “The Origin of the night. (folktale of Paraguay)”